This is another post where I’ve evenly torn between thinking surely no-one needs a recipe for apple crumble, and wondering why I haven’t posted this years ago. The main reason I finally am is that I haven’t quite memorised (or, I blush to admit, even properly written down) the recipe, so I’m constantly having to recreate and tweak on the spot, which is sort of annoying – so really this is more for me than anyone else!

This dessert, apart from the apple puree recipe, is probably the one where I most often use our apple slinky maker (as the kids used to describe it), so I was really surprised to find I don’t appear to have ever mentioned this fabulous gadget! It creates the beautiful semicircle slices you see above, by peeling and cutting the apple into a continuous spiral, that you then cut vertically in halves. It’s the best way of quickly cutting lots of apples into neat slices, as well as creating an apple spiral that most kids love. Obviously you can also peel and slice the apples with a knife, but this definitely makes the job quicker, plus, apple slinkies, how could you say no!

So, to the crumble part. I was surprised, when I decided to compare some recipes, that most seem to just use flour. I tend to think of that flour/sugar/butter crumble as more of a streusel topping, and prefer the variation in texture and crunch you get from adding oats and nuts. it also means, and this is important, that you’re making something that is basically stewed fruit, topped with toasted muesli/granola. In other words, perfect justification for my second favourite way of eating crumble – cold for breakfast with plain yoghurt 🙂 (My favourite is warm with ice cream or cream it hardly need be said)

Finally, I really need to talk about the fabulously pink puree being added to the apple above. This is what makes my actual favourite apple crumble, which is apple and rhubarb, made with homemade rhubarb and grapefruit jam. It’s both the best apple rhubarb crumble ever, and the simplest, with only two ingredients in the filling, and no worrying about sweetness levels, or cooking the rhubarb properly. I’ve talked at length about this wonderful preserve in the linked post, but if you don’t feel like making jam in order to make a crumble, and fair enough if you don’t, just add a bit of extra sugar for a plain apple crumble, or some berries if you prefer.

Preheat oven to 180C with fan/200C without. Peel and thinly slice apples. Place in a large baking dish (approx 33 x 22cm), and pour over jam if using. Otherwise scatter over berries and sugar, adjusting the amount depending on your taste and how tart the apples are. Sprinkle with the crumble, aiming for an even coverage, but still with clumps. Bake for about 30-40 minutes until topping is browned, and apples are tender and falling apart when tested with a skewer. You can reduce the temperature or loosely cover with foil if it’s browning well but the apple isn’t cooked. Serve warm with ice cream or cream, or cold the next day with plain yoghurt.

Notes: I use the smaller amounts of sugar and butter when making the crumble with jam, as it adds both sweetness and moisture. If making a plain apple crumble, or if you like a really buttery crumble, you might like to use the higher amounts.

If making a straight apple crumble, I would also use five rather than four apples for the filling – about 1kg.

6 thoughts on “My Favourite Apple Crumble” 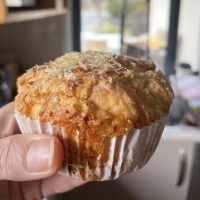 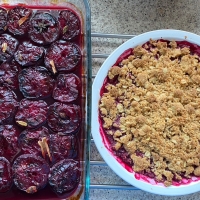 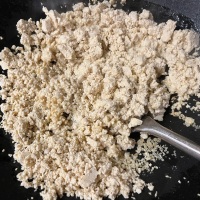 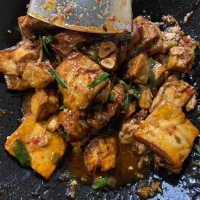 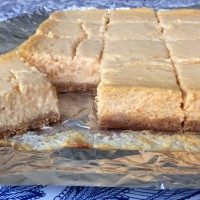 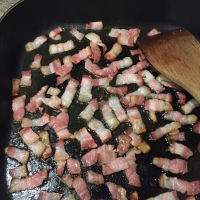