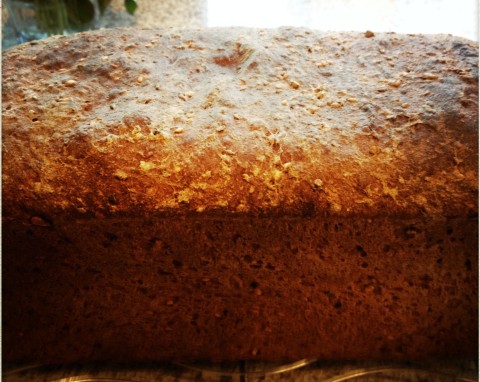 The last couple of years I’ve started making bread regularly. It was something I remembered clearly from childhood, my mother endlessly kneading bread on the wooden board that had belonged to her mother. I think those memories of the endless kneading put me off for a long time, especially when the ease of the breadmaker beckoned… I was convinced to try again when I started reading  all the accounts of no-knead bread.  This was a revolution to me – it was actually possible to make bread without kneading for ten minutes!  Since then I’ve made a lot of bread, and even have a sourdough starter I started myself and use to make bread most weeks. I love sourdough, and have a routine that means very little hands on time (ie about 30 min) from taking the starter out of the fridge to taking the bread out of the oven even though the elapsed time might be a day all up.

I’ll post more about my sourdough another time, but sometimes I still like the idea of making a quick loaf that you can think of and be eating a few hours later. With the combination of lots of yeast and using warm water and molasses, this dough rises ridiculously fast, and the biggest problem is making sure it doesn’t over rise in the tin. I use a stand mixer, but this would also be an easy dough to mix by hand in a bowl.

This loaf is pretty flexible with ingredients. I used the seeds I had, but pumpkin seeds, almonds or walnuts, or small grains such as quinoa or millet would all work; or if you prefer less seedy, cut back and add more oats. This makes quite a dark and slightly sweet bread because of the molasses. It’s yummy toasted with jam or peanut butter, and also good for sandwiches.

Combine all ingredients except molasses, treacle and water in a large bowl – I use my beloved Kenwood Major stand mixer. Combine the molasses, treacle and water together, and mix into the dry ingredients at low speed. Scrape the sides of the bowl and mix for a couple of minutes until it forms a cohesive mass and starts pulling away from the sides of the bowl, though it will still be a sticky dough. Pour some olive oil around the edges and gradually scrape the dough away from the bowl until you can rotate it in the oil. If you don’t mind dirtying another bowl you can scrape the dough into a new oiled bowl.

Leave to rise for 20min and fold the edges of the dough into the middle forming a tighter ball. Repeat after another 20 min, then leave to rise until approximately doubled in volume.

Turn the risen dough out onto a floured bench, patting out gently to a rough rectangle. Roll up tightly into a log and press into the tin. Leave again until nearly doubled in volume. Put in the preheated oven for ten minutes, then reduce oven to 190C and cook for another 30 minutes. Turn the loaf out – it should be well browned, and sound hollow when tapped. Cool completely on a wire rack before slicing – I didn’t, as you can see by how the loaf broke when I sliced it!

[Edit 11/9: This bread was very popular with the family so I made another loaf last night. I was out of molasses so substituted rice malt syrup, which makes a slightly less sweet and lighter in colour loaf, also very good.]