Choosing and making or buying the contents of childrens’ lunch boxes is something most parents will put pretty low on their list of fun activities – probably somewhere below taking the kids to the dentist!  While some children are very happy to have exactly the same thing every day, for those that don’t, there’s a constant negotiation about what they’d like vs what’s practical to pull together during the morning rush or the night before. 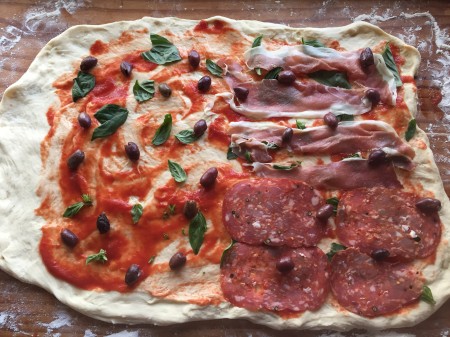 My children aren’t terribly keen on sandwiches as a daily thing.  Pizza they are keen on (surprise!) but I don’t find it very easy to store or pack, and because we make quite thin ones, they need several slices to fill up.  The answer has proven to be these pizza scrolls.  I can use whatever fillings they like, including more than one per batch as you see above, they freeze well, fit in the lunch boxes, and allow enough variety they don’t get sick of them. 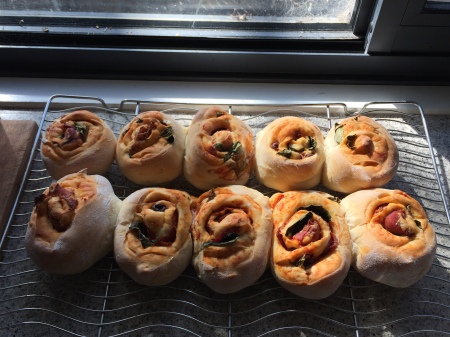 I originally made them with my standard sourdough, but found they were a bit heavy, particularly when defrosting, so turned to an easy milk bread recipe that makes a light bread with an easy to handle dough.  This batch basically makes enough for both children for a week, but you could certainly double the recipe if you wanted to bake ahead – just roll it out in two batches.

Heat milk to boiling – if you use UHT milk you can skip this step.  Add cold water, and cool to approximately blood temperature.  Add yeast and leave 5 minutes.  Add yeast mixture to bowl of a stand mixer with the flour, sugar and salt.  Mix on low speed until roughly combined, then leave 15 minutes.  Scrape sides of the bowl, add roughly chopped butter, and mix at medium speed until combined and smooth.  It will be a fairly soft dough, but smooth and shiny from the butter.

Cover and leave to rise until doubled (about 1 hr in a warm spot), folding the edges of the dough to the middle after 20 minutes.  When doubled, scrape dough out onto a floured board, and pat out with your hands to a large rectangle with a thickness of about 1 cm or a bit less.  Spread with tomato puree, and add whatever roughly chopped toppings you like – we’ve used feta, olives and basil; prosciutto and mozzarella; salami and olives – just keep the layers fairly thin.  You an see a picture of this stage above, with the salami not chopped, but it makes cutting the scrolls easier if you chop it finer.  Leave one end without sauce or toppings.

Roll the dough up starting at the short end covered with filling – in this picture the right hand side.  Roll up as firmly as you can, pinching the edges to seal when you get to the end.  Cut into ten equal pieces, and place cut side down on a large baking paper lined tray.  Preheat oven to 220C while you leave the scrolls to rise in a warm place (like the top of the stove while the oven is heating) for about 30 min until puffy and increased in size.

Bake for 25-30 min until golden brown.  Cool on a rack before storing – these freeze well, or last a couple of days at room temperature. 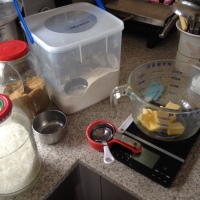