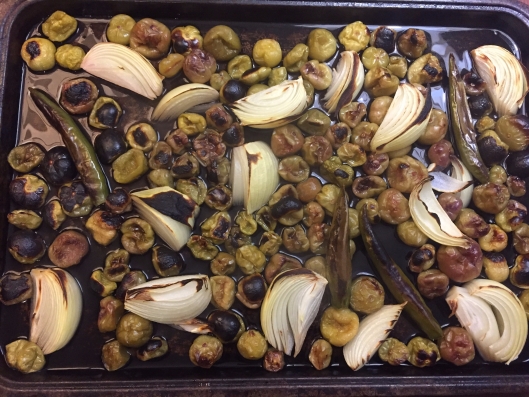 Like many Australians, my introduction to what was described as Mexican food was packet mix tacos from the supermarket. Like the local small town Chinese restaurant, it was a totally bastardised version of the real thing, which we sort of knew, but enjoyed as something a bit different anyway. Occasionally we went to Sydney and had ‘real’ Chinese in Chinatown, but for Mexican we never went beyond those tacos, or maybe nachos for a real treat!

Since the 1980s, modern Australian approaches to different cuisines, especially Asian, have changed beyond recognition, and you can now commonly get not just wonderful Chinese, but Thai, Vietnamese, Malaysian, Lao, Korean etc; but Mexican, or even Tex-Mex, not so much. This means that not only are there few restaurants serving this food, but the commonly use ingredients aren’t readily available.

Things have improved a bit in recent years (you can buy a few brands of locally made corn tortillas for example, and a bigger range of dried chillies) but tomatillos still aren’t commonly used in Australia, and are not available fresh commercially – I’ve only seen them tinned in specialist food shops or occasionally in Mexican food sections in large supermarkets. So where did the haul above come from? Well it turns out they are ridiculous easy to grow, loving our hot summers, and producing several kilos from each plant! I’ve grown them in the past, but these were grown by the wonderful Julie (yes, the same one who grows the fabulous figs and grapes 🙂 ). The seeds are available from the Diggers Club, and one packet will last several years. 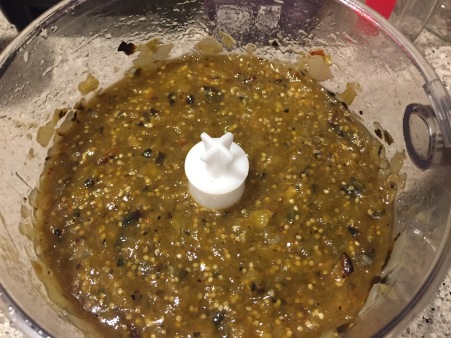 The timing of this bounty was perfect, as I’ve been curious about classic Mexican food (and the many styles of US interpretation) for a while, partly as it’s not a cuisine I’m so familiar with, and partly because it’s clearly so integral to many North American cooks’ repertoire, in the same way we might whip up a Thai-ish stir fry… So recently I’d been trying a few simple dishes – soft fish tacos, tacos de carnitas, spicy chicken enchiladas – and given my tomatillo stash, I thought I’d try classic salsa verde (not the Italian one). 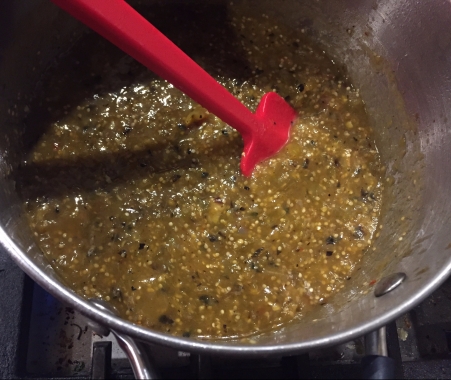 I really wasn’t sure what to expect from this, as tomatillos on their own aren’t particularly exciting, and the sauce contains very few other ingredients. The level of charring recommended was also a bit disturbing, but I went ahead, charring, blending and then cooking briefly in hot oil. The result, unsurprising given its popularity, is delicious; at the same time fresh, tangy, spicy, smoky and a bit sweet. It freezes and defrosts perfectly, and we’ve had it several times drizzled over tacos and in creamy chicken enchiladas (recipe coming soon); and mixing into guacamole, or pouring on fried eggs or burritos is next on the list. If you get your hands on some fresh tomatillos I highly recommend you giving this a try, and you can make it with tinned ones if that’s what’s available.

Peel the husks from the tomatillos and rinse. They have a strange sticky/slippery surface, but that goes when they’re cooked, so don’t worry. Halve tomatillos and spread on a very large over tray, along with the peeled and roughly chopped onions and whole chillies.

Put under a hot grill, about 250C or the high setting. Grill until tomatillos are collapsed and tender and vegetables are largely charred – see top picture.

Tip, with juices, into a blender, add half the coriander, and blend until mostly smooth. Heat the oil in a large saucepan, and pour in the salsa. It will briefly bubble vigorously, but keep stirring and cook for a few minutes until slightly thickened. Season with salt, and cool. If using straight away then add remaining finely chopped coriander, otherwise add after freezing and defrosting.

This keeps for about a week in the fridge, but I suggest freezing in meal sized servings – about 200-300g for serving with tacos, burritos, quesadillas etc, or 500g if making enchiladas.

[To make a classic un-charred salsa, which is fresh and tangy without the smokiness and sweetness, simmer the vegetables in a saucepan in water just to cover rather than grilling, then drain and continue with blending and the subsequent steps.]