The weather is so cold and miserable at the moment that it seems incredible that we were eating these in the sun only six weeks ago.  I’m well aware that for most of you in Australia this recipe arrives much to late to do anything about the annual zucchini glut, and for those of you in the North it’s too early; but these are such a simple and delicious burst of summer I couldn’t resist!

Besides, the limes are a key ingredient, and it is the season for limes, so that’s one seasonal ingredient at least…I imagine you could also take a different tack and substitute a seasonal ingredient such as squash or pumpkin for the zucchini, though I would replace the mint with rosemary, sage and /or tarragon if taking that option, and squeeze over lemon rather than lime.  If trying the version below, you might be tempted to use all fresh mint rather than dried, but I really urge to to try the dried if you can get it as it really has quite a different flavour that goes beautifully with the feta.

One of the things I love most about these is that unlike some other fritters they don’t require last minute frying as guests arrive, as they are probably best served room temperature, though I would scatter the mint at the last minute or it will discolour.

Adapted from a recipe in Nigella Lawson’s Forever Summer

Grate zucchini (and carrot if using) on a box grater, and spread out on a clean tea towel to dry out slightly.

Finely slice the spring onions and chop the parsley and mint, reserving some of the mint for garnish.  Combine the onions and herbs with the crumbled feta, dried mint, paprika, and flour, tossing to combine and remove any clumps.  Season with salt and pepper and stir in the eggs – it will be a very thick mixture.  Stir in the grated vegetables, they will add some moisture and soften the mixture, but it will still be very thick and clumpy.

Heat a couple of tablespoons of olive oil in a large frying pan over medium heat (I use an electric one) and dollop in the mixture (a couple of Tbs per fritter).  Fry for a few minutes each side until medium brown.

Pile on a large plate, top with lime wedges and sprinkle over the mint.  Serve either warm, room temperature or cold – they’re delicious any way! 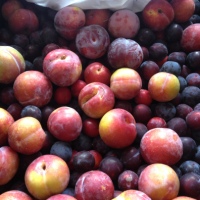 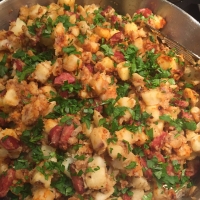 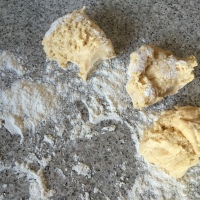